Africa’s quest for railways: Bridging the gap between governments and investors

Are railway networks in Africa meeting transportation needs? Not quite. Here’s how to get there according to long-time CPCS rail expert George Kaulbeck.

Some of the fastest growing economies in the world reside in Africa. But even as the continent edges towards a breakthrough, its rail infrastructure has yet to break free from its colonial shackles.

Indeed, colonialism in Africa has defined political borders and, concomitantly, its rail infrastructure.

Railways were typically assembled close to the coastlines. They rarely ventured deep in the hinterlands. They were also usually kept within the borders of one or two countries. Today, Africa has only 1 km of rail for every 400 km square. In comparison, China has 1 km for every 73 km square. The United States enjoys 1 km for every 40 km square.

In addition to rail shortage, African railways operate on different track gauges (meter and cape gauge being the most prominent). Some countries even employ more than one gauge within their borders. The upshot is that rail connectivity in the continent leaves a lot to be desired.

These vestigial foundations remain at work today. With the exception of a part of the cape gauge network in Southern Africa and the standard gauge network in North Africa, legacy railways are by and large failing to meet modern transportation needs.

According to the International Union of Railways, 90 per cent of passenger traffic and 80 per cent of freight transport go through roads. Meanwhile, what’s left of many colonial railways has fallen further into disrepair.

Most experts agree that there are pressing incentives for more investment in the railway sector – especially for freight traffic. In comparison to road transport, rail seems to be more promising given Africa’s growing production and its massive reserve of natural resources.

“Moreover, rail enjoys lower external costs and is generally cheaper once economy of scale is achieved,” adds George. “Shifting from road to rail is also better for the environment.”

On paper, then, injecting money to revive Africa’s railways seems to be the missing puzzle piece to propel the continent’s development. 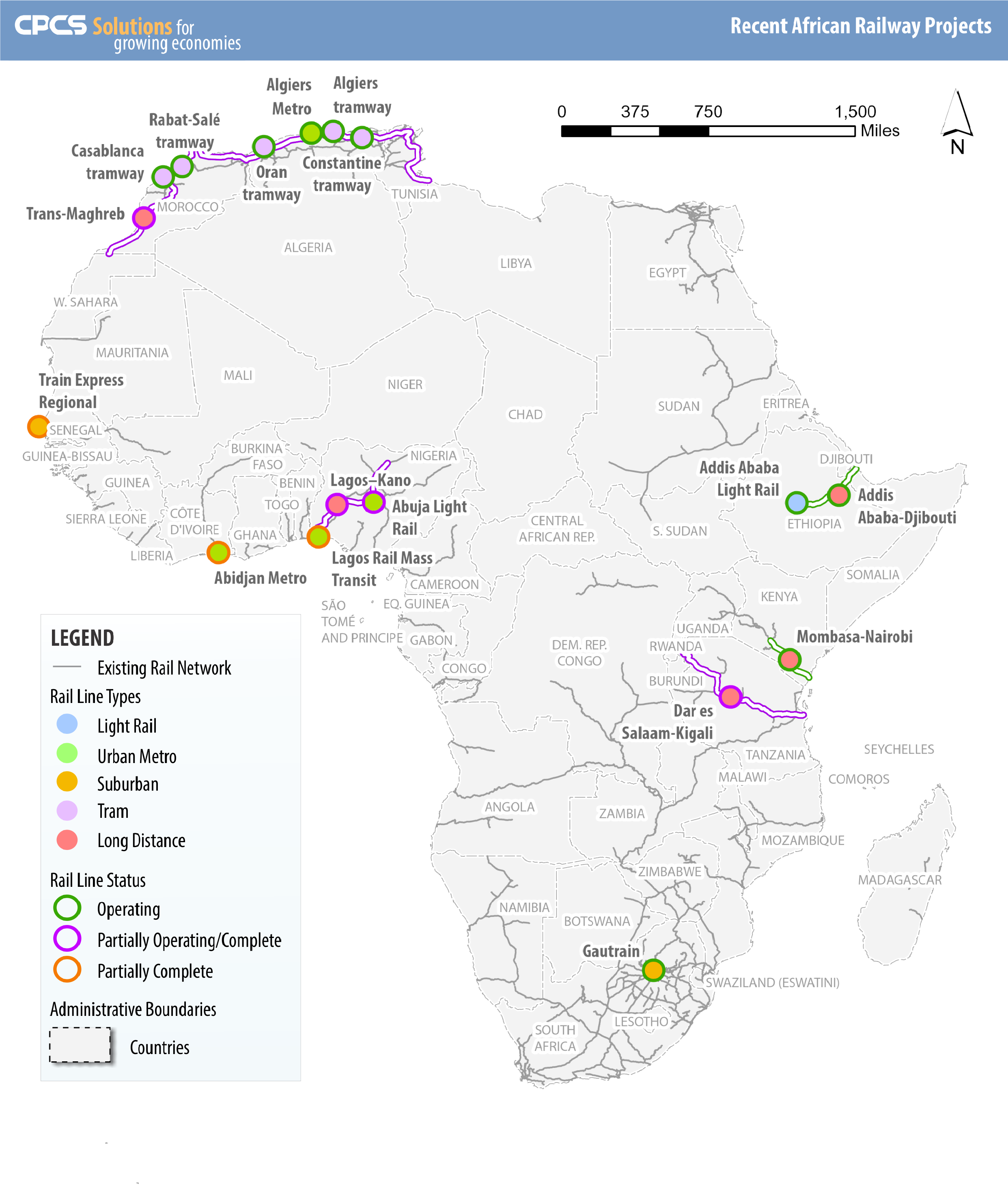 Greenfield railway projects have been government-driven, often with financial support from Export-Import Banks (Chinese, in particular).

However, recent attempts to develop new railways under public-private partnership (PPP) models have not been successful.

In the past 10 years, there has been an increasing appetite for transportation infrastructure investment across the world, largely driven by pension funds and sovereign wealth funds. This investment has not yet materialized in Africa, despite its annual GDP growths have been among the highest since 2010 and its dire need for the infrastructure.

The dearth of investment by pension funds, sovereign wealth funds and as well as private debt and equity funds is most likely explained by the scale and complexity of the risks in investing and the lack of Government capacity and budget to implement projects that meet private sector requirements for return and risk allocation.

These challenges are amplified in the African railway sector, as the magnitude of investment is massive – especially compared to financial returns. On account of these challenges, investment in railways via these funds has stalled.

To follow, we suggest actions that can bridge the gap between African railway financing requirements and the international (and continental) appetite for investment in transportation infrastructure.

Five ways to bridge the gap

Correctly structure the project – Very rarely are new railways solely financed by the private sector, as financial returns usually are insufficient relative to investment requirements. As such, government investment is typically needed to supplement private investment.

When justified by economic returns, the government should invest with specific and realistic roles for the private sector – whether the latter is financing, building or operating the railways. For instance, financing an entire greenfield railway by way of private investment is unrealistic. In contrast, investing in systems or rolling stock may work very well – particularly if packaged with an operating concession and backed by adequate guarantees.

Consider all possible financing instruments – Upfront capital makes up the bulk of the costs in rail projects. Sources of funds to meet them will depend on the delivery structures and the associated sharing of responsibilities between the private and public sectors for the different project components (CAPEX – infrastructure, rolling stock, systems and OPEX – operations and maintenance).

“The principle is to adequately use public and concessional funds during the capital-intensive construction phase and risk mitigation instruments – through guarantees, subsidies or capital contribution – over the entire project cycle to deliver a risk-return profile attractive to private finance.”

Focus on easy wins – Freight railways are most profitable when they move significant and consistent volumes of heavy bulk products long-distance. Seldom will all these factors present themselves in an opportunity, but even a few can form the basis to develop a railway. Additional traffic will add incrementally to profits.

Long-distance passenger rail in Africa is not expected to be profitable. For that matter, it is unlikely to recover its direct operating costs. However, Africa includes 18 cities that have populations exceeding 2 million; many of them effectively lack organized public transit. Though challenges are not insignificant, there will be opportunities for the private sector to participate in a meaningful way in urban rail development.

This changed in 2019, when the African Union (AU) developed its plans for the African Integrated High-Speed Rail Network (one of 12 AU Agenda 2063 flagship projects). The AIHSRN envisaged a multipurpose continental railway linking regions and countries.

“The lesson is to look beyond the immediate benefits of a railway line and to consider the long-term impact of being part of a continental network,” says George.”

Another option, albeit typically more expensive, is Export-Import (EXIM) banks. Such institutions provide financial support so as to promote the beneficiary’s export products and services – including railways.

Africa does not need railways for the sake of having railways

What it does need are railways that are economically and financially viable. Only then will they sustainably drive economic growth. Delivering railways that meet economic and financial requirements will require creative solutions from both Governments and the private sector.

Together, they have a better chance to overcome the unique challenges facing African railway development.

CPCS recently provided support to the African Union Development Agency (AUDA-NEPAD) based in Midrand, South Africa, with the development of plans for the Africa Integrated High-Speed Railway Network (AISHRN).

The AISHRN is a central component to the AU Agenda 2063 and aims to interconnect African capitals, economic and industrial hubs and major tourism locations with each other.

CPCS has for more than 50 years of experience providing railway advisory and consulting services to governments, International Financial Institutions and private sector proponents in Africa. CPCS is excited to continue its involvement in the continent.

George Kaulbeck is Partner and Global Director of Transportation at CPCS and has led or worked on railway assignments in Africa for the past 14 years.