CPCS’s Chief Commercial Officer is convinced the rail industry has the experience, ingenuity, commitment and goodwill to do better.

I found myself shouting at the radio as I listened to BBC interviews with Mick Lynch, member of the National Union of Rail, Maritime and Transport Workers (RMT), Tim Shoveller of Network Rail and the Secretary of State for Transport, Mark Harper.

It’s January 2023 and the UK passenger rail industry is facing industrial action throughout this week with half of the network closed and only a fifth of scheduled trains running. To listen to the interview I’m referring, click here and go to 1 hour, 9 minutes and 11 seconds and then 2 hours 34 minutes and 39 seconds.

Each interviewee seemed committed to reaching a solution but the repeated use, on all sides, of hyperbole and euphemisms like “minimum service levels,” “bosses in despair”, “fair for the taxpayer”, “detailed reforms,” and “blocking a deal” can only serve to infuriate the many listeners who just want reliable trains.

Industrial relations history shows us that negotiators will need to abandon some deeply entrenched positions if we are to get trains running again and re-start a sustained recovery of rail ridership that gives stakeholders what they hope for from the rail industry; from reliable train services for passengers and reduced emissions from passenger travel, right through to attractive career paths for rail workers and new orders for hard-pushed UK-based suppliers of products and services.

Away from all the prepared lines and grandstanding, some positions have already moved, and reasonable deals have been done. It’s high time the remaining impasses were broken.

Despite undeniable long term COVID-induced changes in travel patterns, I see enormous and exciting potential in the UK’s rail industry and the social, environmental and economic value that it can and should deliver, as laid out in Andrew Haines’ recent CPCS-sponsored Beesley Lecture. 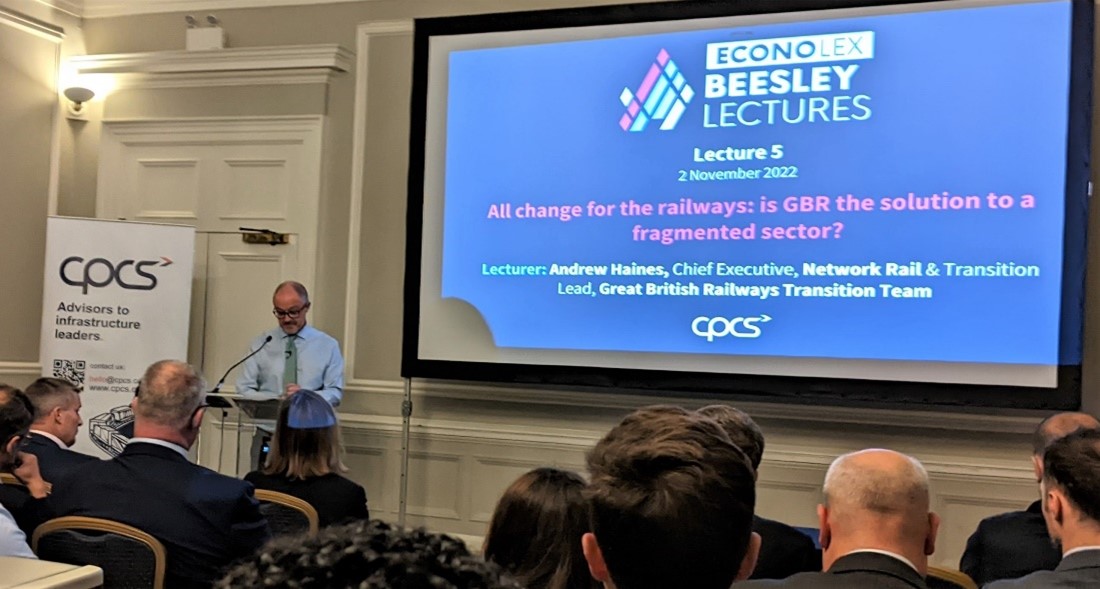 The clincher for me is that without a sustained return to reliable rail services which exploit the very latest operating practices and technologies to attract and retain new as well as seasoned rail users, we will fail to achieve the net zero commitments that the UK has rightly made.

The UK’s November 2020 Ten Point Plan for a Green Industrial Revolution decreed – rightly – that “we must increase the share of journeys taken by public transport, cycling and walking,” adding that the Government would “accelerate the transition to more active and sustainable transport by investing in rail and bus services…”.

More than two years later, we head into 2023 with often self-defeating disputes alongside ongoing delays to what Rail Business UK has called the “breech birth” of Great British Railways. As a result, the promised investment in rail – and in particular the electrification of more of our network – is hanging by a thread.

It will continue to do so until, in all parts of the rail industry, we reform to provide aligned leadership, cultural change and innovation. And we need to do so across fit-for-purpose public and private sector rail organisations that collaborate to deliver safety, inclusion, convenience and reliability at a reasonable and clearly explained cost to the traveller and to the taxpayer.

Of course, this is all easy to write and I know from our advisory work with public and private sector clients that doing so remains a big ask. I am convinced, however, that our industry has the necessary experience, ingenuity, commitment and – still – goodwill on our side.

The alternative looks increasingly bleak. Already, at CPCS, we support infrastructure investors every day who have global choices and engage us to help devise and deliver improved transport infrastructure and services for local communities around the world.

Right now, many such investors can be forgiven for looking away from what some see as a micro-managed UK passenger rail sector failing to produce and implement coherent, investable network-wide plans.

Roll on some much better news from Messrs Lynch, Shoveller and Harper.