This article is the first in a series by CPCS transportation specialists on the current state of the US marine port system as the country continues to deal with erratic supply chains.

According to the United States Maritime Administration (MARAD), the US Marine Transportation System, consisting of waterways, ports, and landside intermodal connections, contributed $5.4 trillion worth of economic activity annually and sustained nearly 31 million jobs in 2018. And ports themselves are the multimodal system workhorses; 361 ports contributed over $378 billion in annual federal, state, and local taxes.

To better understand where marine ports may have the greatest regional impacts, CPCS conducted an analysis using publicly available data for the 2015-2019 period from the US Army Corps of Engineers’ (USACE) online Waterborne Commerce Statistics Center (WCSC). A map has been developed that provides rankings for the 20 US marine ports handling the highest number of loaded twenty-foot equivalent units in 2019. Twenty-foot equivalent units, or TEUs, refer to 20-foot containers used to ship goods.

The data considered in this article focuses on trends preceding the COVID-19 pandemic to avoid statistical “noise.” However, it’s clear the pandemic has impacted supply chains and profoundly altered port operations. Production was halted and ports were relatively quieter as the pandemic initially took hold. Then, armed with stimulus checks and unable to spend on experiences like travel, many US consumers turned to e-commerce, causing a surge in demand for imports. As the initial shock of the pandemic begins to fade, the economy is slowly roaring back to life, increasing demand for goods and further straining ports.

Moreover, suppliers all over the world are facing both uncertain conditions and continued strong consumer demand moving into the second half of 2021. In response, multinational companies are importing more goods earlier.

In May of 2021, the Port of Los Angeles processed over one million TEUs, a first for ports in the Western Hemisphere. And in mid-August of 2021, roughly 90% of ships arriving at the port were directed to park, which led to 70 ships waiting to dock as of September 21. As a result of this congestion on the West Coast, some ships are rerouting to the East Coast. At the Port of Savannah in Georgia, ships were lined up waiting an average of a day and a half to dock in July of 2021.

As the “Top 20 Container Ports in 2019” map shows, the highest number of loaded twenty-foot equivalent units (TEUs) pass through ports primarily located on the East and West Coasts and near major urban centers. These ports also have robust intermodal (i.e., road and rail) connections that enable the seamless transfer of containers to inland distribution hubs. 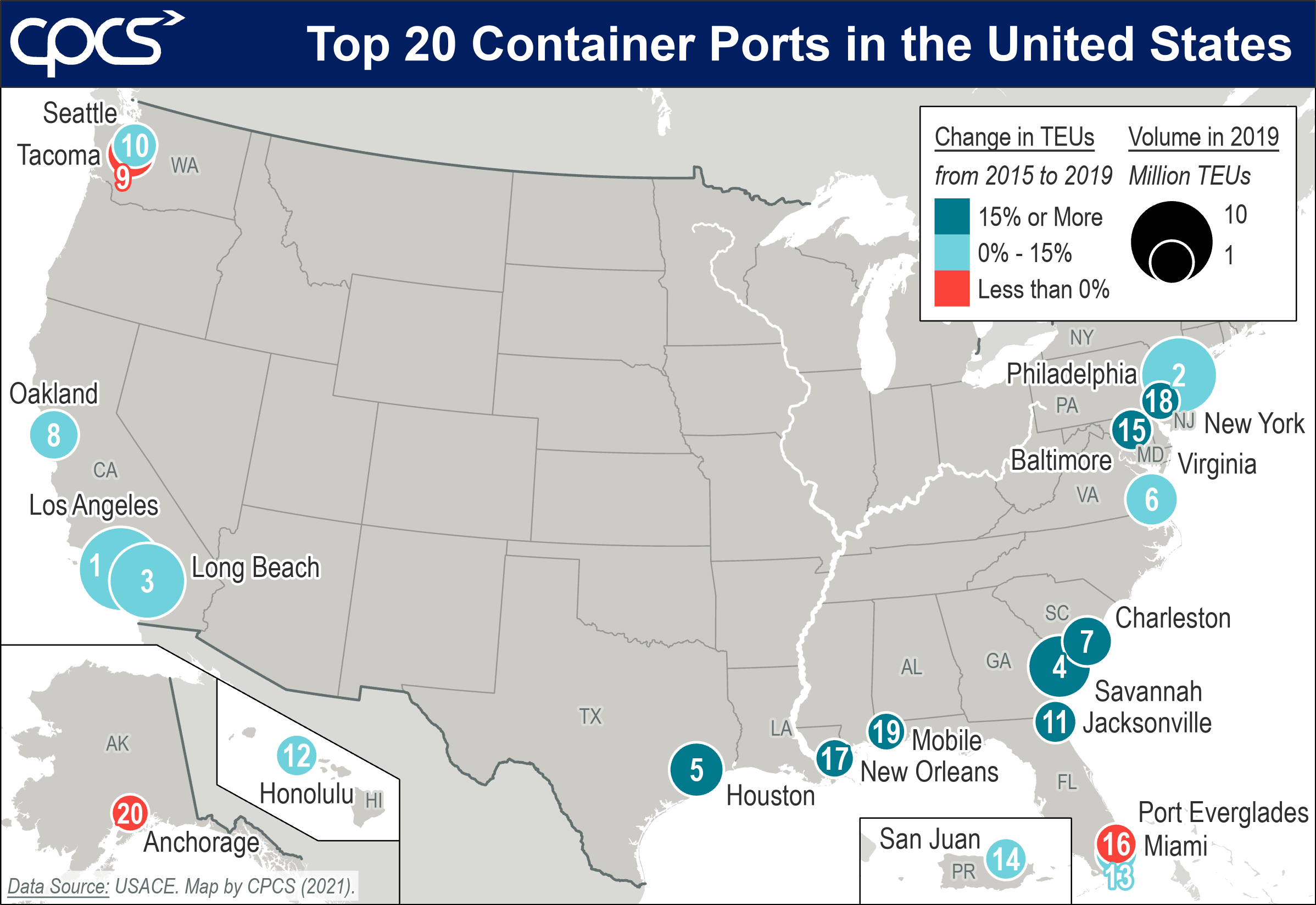 To say containerships are “big” is an understatement. The largest containership in the world, the HMM Algeciras, is longer than the Empire State Building. Many of the world’s largest ships can hold more than 23,000 TEUs, and they continue to be built larger. Not all ports or channels are currently built or equipped to serve these ever-growing vessels. For example, even the recently expanded Panama Canal, a critical shipping channel, only accommodates ships up to 1,215 feet long, the equivalent of about 35 school buses, which is significantly shorter than many of the world’s largest ships.

The following are further select observations on the “Top 20 Container Ports in 2019.”

The rearranged rankings of the biggest ports

The Port of Los Angeles (POLA) and the Port of Long Beach (POLB) ranked first and third, respectively, for total loaded TEUs handled in 2019. These sister ports, located next to each other, form the top US maritime gateway to the Pacific Rim and can each accommodate ships with 53-foot drafts. (A draft refers to the depth of a ship below the waterline.) Together, the two ports employ one in twelve workers in the Los Angeles-Long Beach area.

The POLA has remained the largest container port in the Western Hemisphere for the last 20 years. In 2019, it handled almost 6.3 million loaded TEUs, with its primary trade partners, namely China, Japan, and Vietnam together contributing about $173 billion to the port’s trade value in 2020. The POLA primarily imports consumer goods such as furniture, auto parts, and apparel and exports animal feed, paper and scrap metal, soybeans, and fabrics. The port’s largest and fastest-growing commodity class between 2015 and 2019 is “all manufactured equipment, machinery and products.” “Food and farm products” comes in third overall but is the port’s second fastest-growing commodity class.

In 2019, the POLB handled just under 5.2 million loaded TEUs. The port’s primary trade partners include China, South Korea, and Vietnam. Indeed, over 90% of the port’s shipments are the result of trade with East Asia. Unlike the POLA, the POLB’s largest and fastest-growing commodity class between 2015 and 2019 is “petroleum and petroleum products.” Interestingly, “coal, lignite, and coal coke” is ranked as one of the fastest-growing commodity classes for both ports as a percentage of total traffic. However, coal continues to make up only a small share of total traffic.

The Port of New York and New Jersey (NY/NJ) was formed in the early 1920’s and is known as the birthplace of cargo containerization. The first container ship to Houston sailed out of the port in 1956. In May 2021, the largest container ship to call on the East Coast at over 16,000 TEUs arrived at the port thanks to the recently raised Bayonne Bridge; the bridge elevation facilitates the passage of ships carrying up to 18,000 TEUs.

In 2019, the Port of NY/NJ handled over 5.2 million loaded TEUs, edging out the Port of Long Beach for the second-place ranking. Roughly half of the trade at the port was with China, India, Germany, Vietnam, the Netherlands, France, and South Korea. The port’s largest commodity class in 2019 was “petroleum and petroleum products,” mostly with international origins and domestic destinations. However, “petroleum and petroleum products” is also the fastest-declining commodity class in New York and New Jersey as a percentage of total traffic. “All manufactured equipment, machinery and products” ranks second overall and is the fastest-growing commodity class at the port between 2015 and 2019. In 2019, the Port of NY/NJ handled almost $206 billion in cargo value.

While many ports in the Southeast and Gulf have lower container traffic than the “biggest ports” noted above, they have shown comparatively strong percentage growth between 2015 and 2019.

The Port of Charleston ranked seventh, handling over 1.8 million loaded TEUs in 2019. The port has experienced rapid growth, with container operations growing by almost 20% between 2015 and 2019. The port is situated within easy reach of two inland ports, Port Greer and Port Dillon, and is served by both CSX and Norfolk Southern rail. On track to achieve 52-foot depth in 2021, this would make the Port of Charleston the deepest harbor on the East Coast. This is still shy of the expanded Panama Canal’s depth by about 8 feet.

Containerized freight is important for consumers throughout the US mainland, but it is absolutely critical for populations that are at a distance from the US mainland where other freight options such as long-distance truck or rail are not available.

Honolulu Harbor is ranked twelfth, handling more than 830,000 loaded TEUs in 2019. The harbor is the hub of the Port Hawaii hub-and-spoke system; Honolulu Harbor is the primary entry point for incoming cargo from the US mainland and foreign countries. From Honolulu, cargo is distributed to five other islands served by seven commercial harbor facilities. An estimated 80% of all goods consumed in Hawaii are imported, and over 98% of the imported goods arrive through the commercial harbor system. Due to the critical role the ports serve in Hawaii, the state has embarked on a major container terminal modernization program to ensure that businesses and residents continue to have access to the goods they require. The state successfully completed Phase 1 in 2021 and has begun Phase 2.

The Port of San Juan handles more than 90% of cargo destined for Puerto Rico, and in 2019 the port was ranked the fourteenth largest US TEU port, handling more than 820,000 loaded TEUs. While the majority of the port’s operations are focused on cruise ships and tourist activities, the port saw nearly 15% growth in loaded TEUs handled between 2015 and 2019. The port has also served a critical role in relief efforts following Hurricane Maria, helping to provide fuel, water, food, and medical supplies to residents. The relief efforts underscored the importance of having not only an effective port but also adequate landside connections and services in order to convey goods locally.

The Port of Alaska in Anchorage handled over 255,000 loaded TEUs in 2019, just making it onto the ranking at number twenty. Despite its smaller size in relative terms, the Port of Alaska is a critical node in Alaska’s infrastructure, accounting for 50% of all freight shipped into the state. The port also processes 90% of Alaska’s liquid fuel and 80% of cement used in the state. The importance of this port perhaps explains why Anchorage sued MARAD in 2014 for failing to provide proper oversight on a major port construction project that began in 2003 but was abandoned in 2012. The trial began in early 2021.

As a result of an increasingly global economy, US ports are moving more and more containers. Despite significant investments in recent years, the pandemic has caused port demand to surge far beyond capacity, especially on the West Coast. This is leading to unprecedented port congestion which poses significant risks to the economy, including barriers to trade, good shortages, and inflation. This crisis should not be ignored. It is in everyone’s best interest for the US to:

Erika Witzke is an associate Vice President, Josiah Blackwell-Lipkind is a consultant and Tobin McGilligan is a senior data analyst at CPCS, a global management consulting firm specializing in transportation and energy.