Air freight has been flying high since the pandemic started. Landed cargo at the top 30 US cargo airports grew almost four times faster in 2020 than the previous four-year average. But investments in air cargo facilities will be necessary for air freight to meet growing demands.

Air cargo is a key mode in the freight system, transporting all types of high-value and time-sensitive goods from smartphones to vaccines. According to the Bureau of Transportation Statistics, US airports handled more than 76 trillion revenue ton-miles of cargo in 2020 alone.

We ranked the top 30 US cargo airports in 2020 based on landed weight data published by the Federal Aviation Administration (FAA). Despite the effects of the pandemic on air cargo, we included 2020 data in this analysis for two reasons: 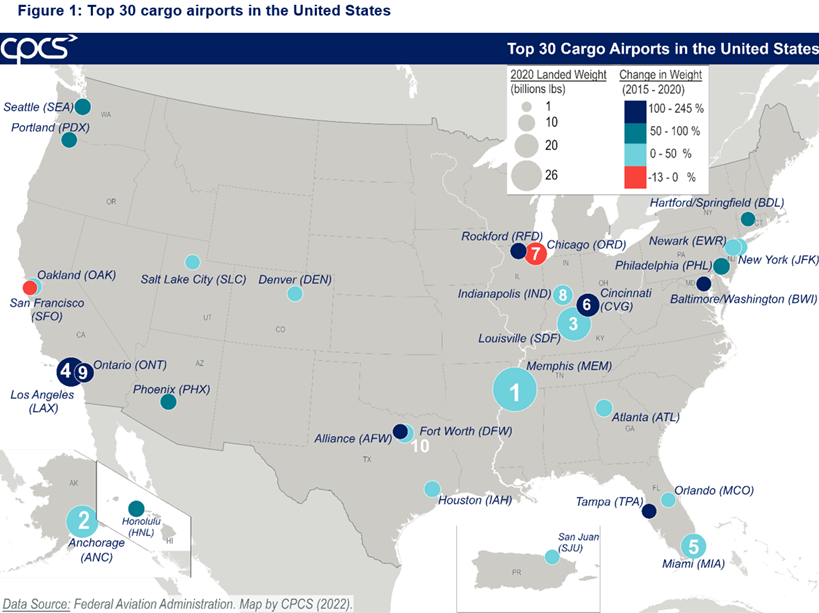 Aviation as a method of freight transportation

Shipping cargo by air is typically more expensive by weight than other freight modes. This makes air suitable for transporting valuable, time-sensitive, or perishable goods. These conditions limit the share of cargo transported by air compared to other less expensive modes like roads, rail, and water, as shown in Figure 2.

However, Figure 3 shows that the average value per ton of air cargo is higher than other modes.

Figure 4 shows the top 30 US cargo airports together handled almost 165 billion pounds of cargo in 2020 compared to more than 121 billion pounds in 2015. More than 45% of this five-year growth took place in the one-year period from 2019 to 2020. The remaining 55% occurred during the four previous years. 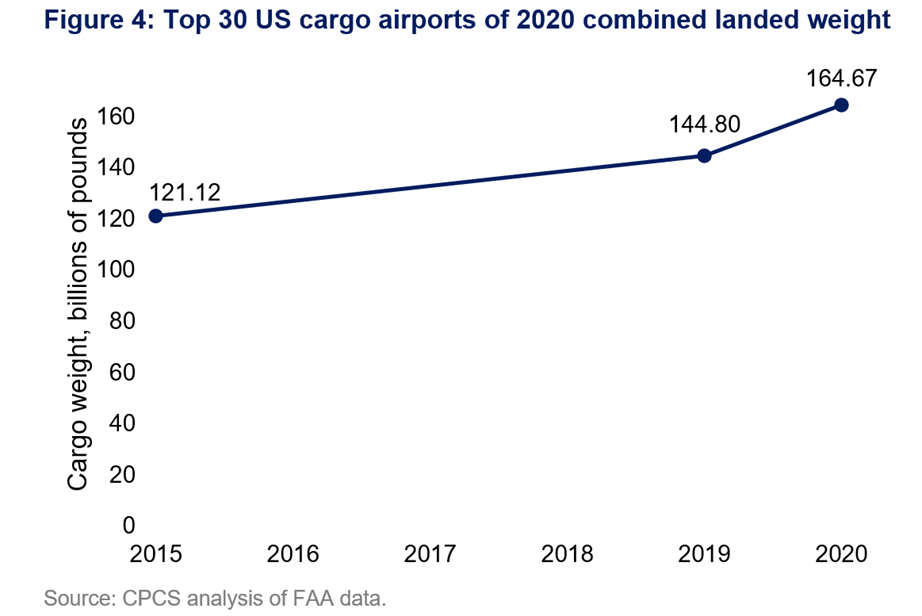 The rapid growth in landed cargo in 2020 is likely the result of several pandemic-related factors:

The Midwest has some of the largest and fastest growing cargo airports. This is largely due to major logistics and distribution companies operating hubs in the region, including FedEx, UPS, and Amazon. Let’s look at this more closely.

The largest US cargo airport by landed weight is Memphis International (MEM), which processed more than 25 billion pounds of cargo in 2020. Memphis posted nearly 11% growth between 2015 and 2020. Hong Kong overtook Memphis as the largest cargo airport in the world in 2011, but Memphis regained its title in 2020. This is largely because the airport houses FedEx’s Express World Hub. FedEx’s second-largest hub operates at Indianapolis International (IND), the eighth-largest airport in the US by landed weight.

Louisville Muhammad Ali International (SDF) is the third-largest cargo airport in the US by landed weight. The airport handled almost 17 billion pounds of cargo in 2020, about 39% more than in 2015. Louisville is home to UPS Worldport, a hub that covers an area of 5.2 million square feet (more than 90 football fields) and can process 115 packages per second (about 10 million every 24 hours).

Cincinnati/Northern Kentucky International (CVG) is another important Midwest cargo airport, ranking sixth nationally in 2020. The airport has had strong growth, with landed cargo weight increasing by 104% between 2015 and 2020. This growth rate is higher than every other cargo airport ranked among the top 16 nationally. Cincinnati is home to DHL’s North American hub and Amazon’s central Prime Air hub.

Chicago O’Hare International (ORD), among the largest passenger airports in the US, ranked seventh in terms of landed cargo weight in 2020. Between 2015 and 2019, the airport saw cargo weight fall by nearly 28%. Between 2019 and 2020, growth returned at a rate of more than 20%, but the airport still had a net decline of over 13% over this five-year period. The slowdown may be due to shippers choosing other less congested airports, such as nearby Rockford. In 2019, O’Hare was experiencing significant cargo delays and was reportedly more congested than New York’s JFK.

Chicago/Rockford International (RFD) ranks as the seventeenth largest cargo airport in the US by landed weight. However, the airport saw 244% growth between 2015 and 2020, the largest among the top 30 US cargo airports. Rockford is home to UPS’s second-largest North American facility and is a major Amazon Air hub. The airport has been expanding rapidly in the last few years. In 2018, Rockford began construction of a 120,000-square-foot expansion to its air cargo facility and a new ramp for cargo aircraft parking. In 2020, the airport broke ground on a new 90,000-square-foot cargo hub as part of a broader two-phase expansion project intended to build on the airport’s recent momentum in the airfreight space.

Anchorage, Alaska – Technical stop between the US and Asia

Many of the flights that land in the Midwest also land at Ted Stevens Anchorage International (ANC), the second-largest cargo airport in the US by landed weight. Anchorage, supposedly located 9.5 hours from 90% of the industrialized world, serves as a technical stop for planes to land, refuel, and often switch out crew midway between markets in Asia and the US. While planes today can make the 15+ hour flight between points in the US and Asia, a stop at Anchorage allows planes to carry more cargo and less fuel.

While the airports in the Midwest have typically catered to Asian and European markets, Miami International (MIA) has long been known as the US gateway to Latin America and the Caribbean, handling 85% of the region’s imports and 80% of its exports. This role has helped Miami maintain the title of the number one international freight airport in the US. Miami recently became the first airport in the Western Hemisphere, and the second in the world, to be certified as a pharmaceutical freight hub by the International Air Transport Association. In 2020, Miami ranked fifth among US cargo airports by landed weight and has experienced 30% growth between 2015 and 2020.

Los Angeles International (LAX) serves as a top hub for US trade with Asia and provides a West Coast alternative to stopping in Anchorage. The airport ranked fourth in the US for landed cargo weight in 2020 and more than doubled the cargo it handles between 2015 and 2020. China was Los Angeles’s largest import partner with trade in 2019 valued at more than $33 billion, followed by Japan, India, Taiwan, and Hong Kong. Electronics are the top import commodities through Los Angeles. In 2019, the airport imported more than $10 billion worth of cell phones, an increase of 31% from 2018.

Tampa International, the second-largest cargo airport in Florida behind Miami, ranks twenty-sixth nationally. The airport has seen explosive growth in recent years, handling 231% more cargo in 2020 than in 2015. To support this growth, Tampa’s 2019 capital program included about $69 million in investments to its cargo facilities

Baltimore/Washington International, ranked twenty-fourth nationally in 2020, has also seen tremendous growth in its air freight traffic, with landed weight up 190% between 2015 and 2020. In 2019, the airport raised over $36 million in financing to construct a 200,000-square-foot cargo facility and a 450,000-square-foot parking apron.

Fort Worth Alliance, which ranked twenty-third nationally in 2020, saw an impressive 63% growth in landed weight between 2019 and 2020 alone. The airport, touted as the world’s first industrial airport, is part of the broader 27,000-acre, master-planned Alliance, Texas, industrial complex which is home to tenants including Facebook, BNSF Railway, and Charles Schwab. In 2018, Amazon selected Alliance as the location of a new regional air hub.

Only time will tell if the rapid growth in air cargo spurred by the pandemic will continue.

This depends on factors such as the growth of global trade via air, the level of domestic consumer e-commerce demand, and the availability of air freight capacity.

As a sign that air freight is not immune to the same supply chain disruptions as other modes, air cargo growth in November 2021 slowed significantly compared to previous months due to a lack of storage space available at airports and other logistics issues. For air freight to continue growing, sizeable investments in air cargo facilities, like those made recently by Amazon, FedEx, and airport authorities, will be crucial to support operations.

On the other hand, technologies sometimes present their own challenges.

Recent concerns around the deployment of 5G technology, the fifth generation of cellular networks, is an example. Airlines have repeatedly asked for the deployment to be delayed to more closely analyze its effects on air traffic control operations. Airlines fear that 5G’s broader spectrum may interfere with air traffic frequencies and other safety equipment.

As a result, some flights have recently been suspended where 5G networks are being deployed. So far though, there have been fewer disruptions than initially feared thanks to a deal to limit 5G implementation near airports. It remains to be seen how quickly 5G can be reconciled with air traffic control operations.

Josiah Blackwell-Lipkind is a US-based transportation consultant and Caroline Akoth is a Data Scientist at CPCS, a global infrastructure management consulting firm specializing in transport, power and public-private partnerships.

Like what you read? Subscribe to our newsletter below and be the first to get blog updates and gain free access to exclusive webinars and research.