CPCS sees a lack of joint thinking to connect Ottawa’s light-rail train and Gatineau’s future tram. Governance and politics should not get in the way of taking a big picture view of how to deliver the greatest value to passengers and serve Canada’s entire National Capital Region.

Gatineau now wants to spend $3 billion to bring light rail across the river, but their plan has two big flaws.

First, it will only serve western Gatineau (Aylmer), the least populated part of the region. More than a hundred buses from eastern Gatineau and Hull will continue to run across the Portage Bridge.

Second, it wants to build its own system, with its own tracks in downtown Ottawa, probably a tunnel under Sparks Street paralleling OC Transpo’s tunnel under Queen Street. Outaouais commuters who want to go beyond downtown, to Tunney’s Pasture, Carleton, Ottawa University, or the Airport, will need to climb out of the STO station, walk a block or two on (sometimes frosty) streets, then ride escalators back down to board the O-Train and backtrack through downtown Ottawa. 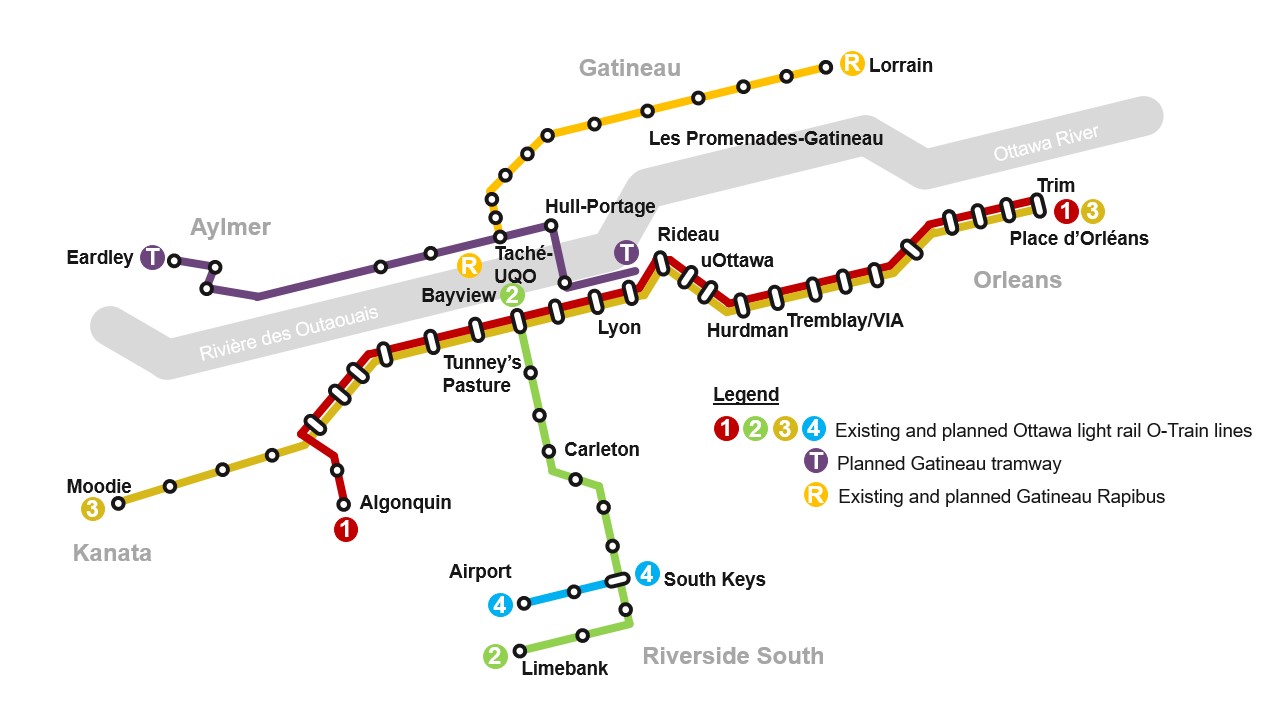 We think we have a better idea: electrify Ottawa’s north-south Trillium line, which will soon run to Ottawa Airport, and extend it across the river on a new bridge, alongside the historic Chief William Commanda (formerly Prince of Wales) Bridge. Branches can run to Aylmer and up the route of the existing Rapibus, which can easily be converted to electrified rail. Because this approach will use mostly existing corridors, it will cost less to build and avoid years of construction disruption in the heart of the capital. It will also attract many more riders because it will offer shorter, faster and easier trips, not just to downtown but between all parts of the region. Aylmer trains would run through downtown Ottawa to the VIA station, while Hull trains could run to Ottawa Airport. Travellers between Gatineau and south and western Ottawa would change at Bayview, avoiding downtown Ottawa entirely. 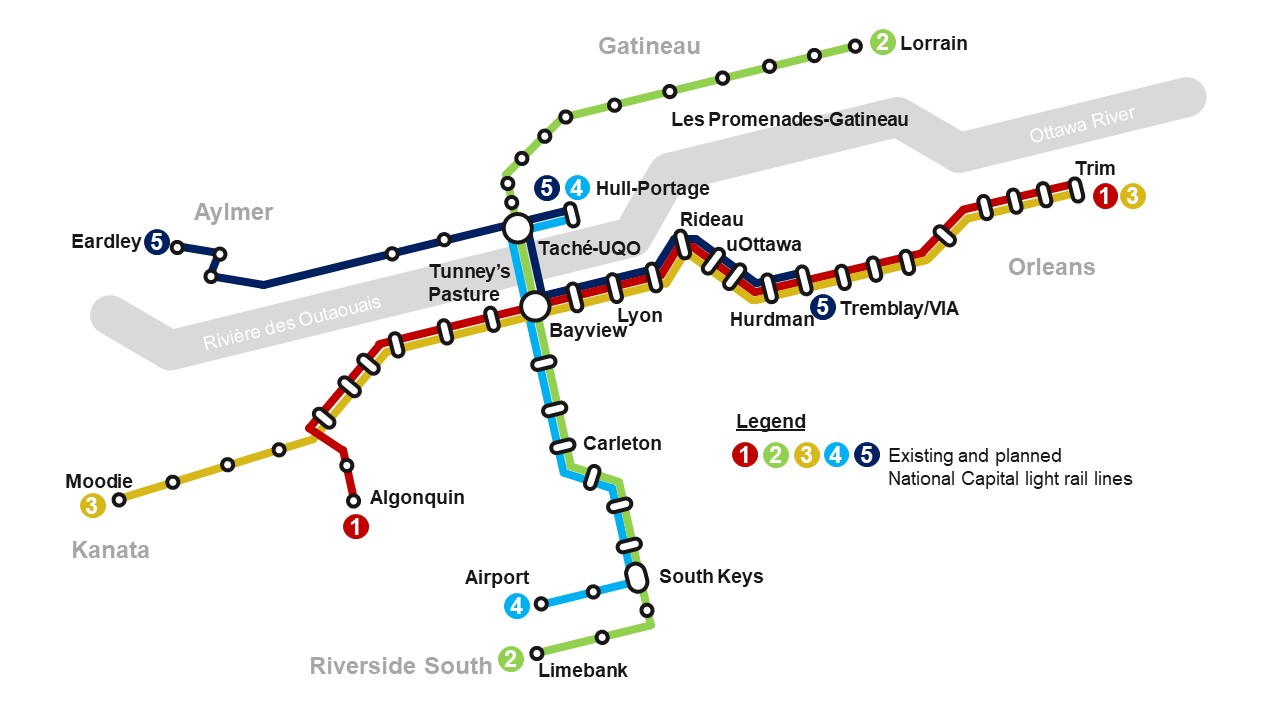 Why hasn’t this happened?

First, the City of Ottawa refused to let Gatineau run over the Chief William Commanda Bridge, because it wants to refurbish it as a trail for walkers and cyclists. Fine, so why not build a bridge for light rail alongside it?

Second, OC Transpo says they don’t want more riders at Bayview, because they need to protect capacity for future growth from Kanata and Barrhaven. Yet even with these extensions, OC Transpo doesn’t plan to run more than 24 trains per hour. Similar systems in other cities now run up to 40 trains per hour. Surely OC Transpo could let STO operate 12 trains onto the system from Gatineau? If, in 30 years, the system really does reach capacity, a second tunnel can be built. But don’t spend $1 billion now on something that may never be needed.

It’s time for joined up thinking, covering the full national capital region. Several European cities straddle international borders, and have overcome not just language but even currency boundaries. For example, Basel’s trams seamlessly connect the Swiss city with neighboring France and Germany. Copenhagen’s trains run under the ocean to nearby Malmo in Sweden. Surely Ottawa and Gatineau can achieve something similar?

As a funder and planner of the National Capital, the Government of Canada is uniquely placed to show leadership and make sure the right system gets built. Discussion so far seems to have focused on a tramway “loop” to link tourist sites on both sides of the river. This looks attractive in artists’ drawings but is unrealistic and does not adequately respond to the transportation needs of residents. People need fast, efficient transit all year round, to get to work, school, and play. We already have a high-capacity tunnel under the city. Let’s use it to build a network serving the whole region, regardless of provincial boundaries.

Michael Schabas and Peter Harrison are consultants at CPCS, an Ottawa-based global management consulting firm specializing in transportation and energy.